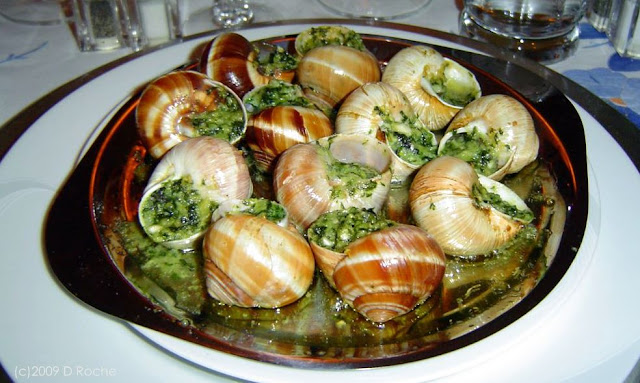 Now you knew this dish was going to come up sooner or later, right? I want to talk about Escargots for a moment. Once I have shared a few facts about this delicacy, I hope that you will have a renewed opinion. I direct this at those of you who have never tried them. Those of you that have need no introduction or convincing as to how wonderful they are.

Here are some simple facts. Most of the escargots that are eaten come from France. Their cultivation is strictly regulated by the food and safety arm of the government. The escargots are cultivated in a "cage" configuration that doesn't enable any of them to set foot on the ground. The more famous and well known of these species is the Escargots de Bourgogne, which are of the larger variety, and have a subtile flavor with an herbal bouquet. They can be found in most supermarkets such as Kroger's, Albertson's, and Safeway, and are sold in cans of a dozen. Servings should consist of at least 1/2 dozen per person.

I love to prepare Escargots de Bourgogne for my dinner guests. Thankfully, all that attend my dinner parties love these little morsels so I'm a happy camper. All too often, food preparers have a tendency to overwhelm the escargots with tons of garlic. This tends to kill your ability to taste the herbal essence that is so typical of the Escargots de Bourgogne. This recipe that I will share with you is my own creation and after experientation time and time again, I think that I have perfected the dish (at least for my taste). Again, the escargots can be found in most supermarkets and the shells, which are reusable, are usually located right on the same shelf and come with a can of 1 dozen escargots.

For a serving of 4 dinner guests you will need:

2 dozen large Escargots de Bourgognes and 2 dozen escargot shells
1 shallot (finely minced)
3 cloves of garlic (finely minced and crushed)
1/4 cup finely chopped parsley
2 cubes of butter (yes, that's cubes. You may not use it all, but we'll spread some on bread)
1/2 teaspoon of salt
1/4 teaspoon of "white" pepper
1 tablespoon of dry white wine
2 drops of white truffle oil (if you have it -- try)
2 drops of garlic oil (sometimes it's "garlic truffle oil")
1 French Baguette (might want to get 2 of them) 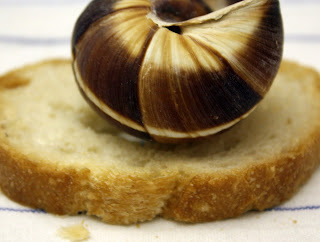 You are probably going to have to buy a few things that you don't have in your kitchen; however, all these items can be used over again or used in other food preparation. First, if you can find escargots baking plates and they aren't expensive, that is good. Otherwise, you can buy some of the pre-sliced bags of French bread and cut a hole in the center of the slice so that you can place the escargot shell upright in the oven, like the picture illustrates. Then, you might want to buy those little escargot clamps that allow you to grab the shells so that you can scoop out the escargot. I haven't come up with a substitute for that. Scooping them out can be done with the little cocktail forks or.... tooth picks.

OK, now lets get the butter paste together. Make sure the butter has been out of the fridge for a good hour. Place the butter in a bowl and blend until it's a nice smooth paste. Now add the salt and pepper, along with the garlic and truffle oil and blend well. If you find "garlic truffle oil" then use 3 drops and forget the white truffle oil, ok? Mince your shallot, garlic, and parsley very finely. If you have one of those mini food grinders, that'll work great. Once that is done, add it to the butter mixture along with the white wine and mix well until blended.

Preheat your oven to 400. Take the escargots and rinse them in cold water and drain. For each shell, start by adding a little of the butter paste into the opening, then add an escargot and push it in. Now plug the hole with some more butter mixture and set on your escargot baking dish or on the improvised "holely bread". Continue that until all shells are filled. Place on a cookie sheet so drippings to spill into the oven. Bake at 400 for 10 to 12 minutes or until the butter is bubbling. Remove and serve 6 per person along with slices of baguette to sop up the butter sauce. It is best that escargots are served hot, but be careful because they are really hot. Enjoy !!
Posted by Unknown

NonChefNick's Swai fish recipes are now featured on www.swai.com. Click on the link for additional healthy recipes for this wonderful fish!

Nonchef Nick would like to welcome a new affiliate to this blog site, Joy Bauer! JoyBauer.com is the online home of the "Today Show" nutritionist and "Food Cures" author. I urge you to check out this great site that features the nutritional and health side of the foods we eat. Packed with wonderful articles, tips, and advice, this information packed website is a must view for everyone. Simply click on the Joy Bauer button below. Enjoy! 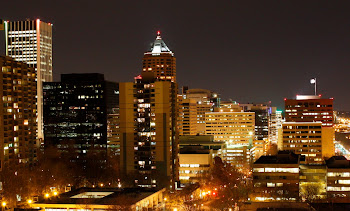 Welcome to Portland, Oregon, the city of my residence. I want to take a bit of your time to tell you more about this lovely city, located on the west coast of the USA in the state of Oregon. Nicknamed The City of Roses, for its numerous Rose gardens and the annual Rose Fesitval during June that features its Grand Floral Parade, Portland lies in the Willamette Valley of the state of Oregon. There are two rivers that flow through the city, the Willamette which separates the west side from the east and the Columbia which borders the north. Great mountain peaks dot the skyline with Mt. Hood and Mt. St. Helens, both a little more than an hours drive away.

With a population of approximately 600,000 and 2 million including the metro area, Portland is one of the most livable cities in the USA, thanks to its many parks, bike paths, tolerant citizens, and control of growth policies. It boasts a first class mass transit system with numerous bus routes, a light rail system, and trolley car lines. The city has maintained a vibrant city core with Portland State University at its southern end, the largest university in Oregon.

Should you have a desire to visit this beautiful city, there are many wonderful hotels available with a wide range of prices to fit most budgets. There are too many attractions and things to do to here, but a few have been above mentioned. It would certainly be worth your while to research our city and plan a visit soon. 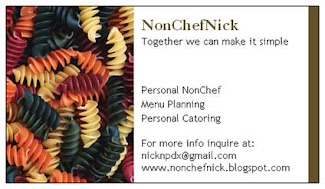 Some Of My Favorite Links

Through the course of the life of this blog, my aim is to make your kitchen life easier and enjoyable. Understanding that it's impossible to cover everything for everyone on this site, should you have a question or comment that you wish answered personally, please feel free to email me at nicknpdx@gmail.com. If you comment on an article or in my guest book and want a response, be sure to leave your email address. I promise to respond within 24 hours.